VTE is triggered by intravascular activation of coagulation resulting in thrombin-mediated intraluminal fibrin deposition (reviewed in 4). Red blood cells (RBCs) become incorporated into the fibrin network, and undergo consolidation as the thrombus contracts. This process culminates in the production of a fibrin- and RBC-rich thrombus characteristic of venous thrombi.

Factor XIII(a) crosslinking of fibrin α-chains mediates RBC retention in venous thrombi, and consequently, thrombus size. Factor XIII (FXIII) is a protransglutaminase that, once activated to FXIIIa, crosslinks fibrin and other proteins to the clot. We recently investigated the contribution of FXIII to clot formation and found that FXIIIa activity is a major determinant of both clot RBC content and clot size.5,6 Briefly, we observed that in the absence of plasma FXIII, RBCs are extruded from contracting human whole blood clots, resulting in the production of small clots.5 These observations were consistent with the “excessive red cell fallout” reported many years ago in a study of a family with congenital FXIII deficiency7, and suggested a previously-unrecognized role for FXIII(a) in mediating clot composition.

More recently, we found that FXIIIa does not directly crosslink RBCs to the clot, but rather, promotes RBC retention via its effects on the fibrin network. During coagulation, FXIIIa crosslinks residues in the fibrin(ogen) γ- and α-chains, increasing clot biochemical and biophysical stability. Using recombinant fibrinogen variants that lack γ- or α-chain crosslinking residues and FXIIIa inhibitor concentrations that preferentially block formation of α-chain-rich high-molecular weight crosslinked species but not γ-γ dimers, we showed that the effect of FXIIIa on RBC retention is mediated by its ability to crosslink fibrin α-chains.6 Together, these findings reveal a previously undescribed role for FXIII-fibrinogen interactions in VTE, and suggest the FXIII(a)-fibrinogen axis is a novel therapeutic target for reducing VTE.

Implications. These findings raise intriguing questions about the possibility of targeting FXIII(a) to reduce VTE. Notably, FXIII has a wide normal range in humans, and neither FXIII-heterozygous mice (50% FXIII) nor Fibγ390-396A mice show signs of excessive bleeding5,8,9, suggesting there may be a therapeutic window in which inhibiting FXIII does not significantly increase bleeding risk. In vitro experiments show that treating normal human blood with a transglutaminase active site inhibitor dose-dependently increases RBC extrusion from contracting clots and reduces clot size5, providing proof-of-concept for this approach. However, it remains unclear whether FXIIIa inhibition is a viable approach for anticoagulation in vivo. At present, these studies are hindered, in part, by the lack of specific FXIIIa inhibitors with appropriate pharmacokinetic and pharmacodynamic characteristics for in vivo experiments. Efforts to generate these molecules are underway.

These observations also have important implications for understanding fibrin function during coagulation. These findings appear to unite observations on the (patho)physiologic effects of FXIIIa during thrombosis with decades of elegant studies elucidating the remarkable biophysical characteristics of fibrin fibers. Fibrin has impressive extensibility akin to that seen in spider silk, with the ability of fibers to be stretched over 2.5 times and recover elastically.10 Notably, these characteristics are strongly influenced by fibrin α-chain crosslinking, which increases fibrin fiber elasticity and stiffness.11 Thus, fibrin networks may require stiff fibers to retain RBCs within the contracting thrombus. It is therefore interesting to consider that in addition to maintaining clot integrity during blood flow and wound healing, crosslinked fibrin is also critical for determining thrombus composition (RBC content). The potential impact of thrombus RBC content on thrombus resolution remains to be determined.

Further studies of mechanisms mediating both individual fibrin fiber and whole clot integrity are likely to reveal new information on the contribution of fibrin crosslinking to hemostasis and thrombosis, and the feasibility of modulating this activity to decrease VTE. 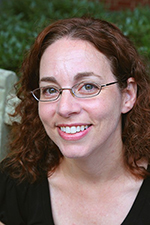 Prof. Alisa Wolberg is an Associate Professor in the Department of Pathology and Laboratory Medicine at the University of North Carolina at Chapel Hill. Prof. Wolberg’s research interests focus on (patho)physiologic mechanisms that contribute to hemostasis and thrombosis, with a particular focus on mechanisms that mediate fibrin formation, structure, and stability.