Alzheimer’s disease (AD) is a devastating neurodegenerative disease and the most common form of dementia. Although a great leap has been made in identifying genes involved in early-onset AD and unravelling the biological mechanisms of AD, only limited progress has been made in the development of truly disease-modifying treatments. It goes without saying that novel therapeutic targets and agents are of crucial importance for the AD field. Senile plaques (SPs), neurofibrillary tangles (NFTs) and cerebral amyloid angiopathy (CAA) are the main pathological brain lesions defining AD. Both SPs and CAA primarily comprise extracellular deposition of aggregated Aβ protein, a 4kDa proteolytic cleavage product of the Aβ precursor protein. In SPs, neurotoxic Aβ oligomers and aggregates are formed and deposited in the brain parenchyma, whereas in CAA Aβ accumulates in the outer portion of the media of brain vessels, leading to degeneration of both cerebrovascular cells and ultimately neurons. NFTs, are intraneuronal inclusions in the cytoplasm of the neuron composed of paired helical filaments. These filaments consist of hyperphosphorylated bundles of the microtubule-binding protein tau, which is involved in microtubule stabilization. Despite the well-characterized pathology underlying AD, current symptomatic therapies and recent trials designed to counteract and/or remove aggregate formation and deposition in AD patients have met with little success.

Tissue transglutaminase (tTG) is a member of the transglutaminase protein family (EC 2.3.2.13) of which there are nine encoded in the human genome. tTG is a calcium-dependent enzyme that catalyzes several reactions, including the formation of (γ-glutamyl)polyamine bonds, the deamidation of protein substrates, and the formation of covalent ε-(γ-glutamyl)lysine isopeptide bonds, which result in both intra- and intermolecular protein cross-links. tTG-catalyzed intermolecular cross-links induce stable, rigid and insoluble protein complexes, whereas intramolecular cross-links change the conformation of proteins. It is the formation of stable protein complexes which are induced by self-interacting proteins that play a central role in the pathogenesis of a number of neurodegenerative diseases. Thus, inhibition of tTG-catalyzed cross-linking of proteins involved in neurodegenerative diseases might be a potential therapeutic strategy to counteract the disease process. The potential importance of cross-links induced by tTG in AD pathogenesis was already noted in the early nineteen eighties 2.  Since then, evidence for a role of tTG in the pathogenesis of AD has been mounting 5,8. There is strong evidence that tTG is linked to the pathology of AD.

Tissue transglutaminase in AD pathology
Both tTG levels and TG activity are elevated in the cortex of AD brains, compared to control patients. Significantly elevated tTG levels have been reported in the cerebrospinal fluid of AD patients compared to controls, suggesting the potential to use tTG protein levels in the cerebrospinal fluid as a diagnostic marker for AD. Moreover, the level of ε-(γ-glutamyl)lysine isopeptides was significantly elevated in the cerebrospinal fluid of AD patients. In line with these data are the findings of correlation between accumulation of insoluble proteins containing isopeptide bonds in the gray matter with cognitive impairment in AD patients. In addition to these biochemical data, immunohistochemical studies on post-mortem tissue sections have shown that tTG enzyme is present in the Aβ core of SPs. A more recent study of our own group confirmed these data and additionally showed colocalisation of the tTG enzyme with both diffuse and classic SPs 7 (figure 1). The presence of tTG in diffuse SPs suggests an early involvement of tTG in SP formation, as diffuse SPs might be precursors of the classic SPs. More interestingly, we found the presence of TG-catalysed cross-links in both diffuse and classic SPs 7, indicating that tTG is not only present but also catalytically active within these lesions (figure 1).

The first in vivo evidence that tTG is involved in NFT formation by cross-linking of tau into helical filaments was provided by Selkoe and coworkers in the early eighties 2. Both phosphorylated tau, which accumulates in NFTs, as well as non-phosphorylated tau are substrates for tTG. Of importance for the notion of an early involvement of tTG in NFTs formation is the finding that tTG cross-links tau into an “anti-parallel dimer” that might act as a seed for further tau aggregation. Apart from these in vitro findings, both we and others have observed tTG immunoreactivity and tTG-catalyzed cross-links in NFTs in AD brains 7 (Figure 1). Interestingly, these intraneuronal tTG-catalyzed cross-links were found to increase during aging in the brain, albeit to a lesser extent as compared to AD brains. Purification of the helical filaments of AD brain tissue showed that the tau filaments contained TG-catalyzed cross-links 10. Interestingly, cross-linked tau filaments are found before NFTs are detected, indeed pointing towards an early role of tTG-catalyzed cross-linking of tau in the formation of NFTs 3 (figure 1). However, more recent work of our group provides evidence that apart from tTG, also TG1 is present in NFTs in AD 7. In fact, TG1 is the major TG found in tau inclusion in other taupopathies, i.e. progressive supranuclear palsy and Pick’s Disease 6, and tau is a substrate for TG1-catalyzed crosslinking. In addition, TG1 is the only TG present in ageing-related protein inclusion bodies packed with TG-crosslinked products, known as corpora amylacea 9.
The first evidence that tTG is present in CAA was provided by us in 2009, showing that both tTG and TG-catalyzed cross-links were present in halo’s surrounding the deposited Aβ in CAA-affected vessels 7. Following up on this study, we set out to further investigate the association of tTG and its activity with CAA, and found that in an early phase of CAA formation, elevated levels of tTG immunoreactivity do colocalise with the deposited Aβ in CAA 1. These findings are in line with the observations made in diffuse SPs, and suggest that tTG is likely to play an early role in both SP and CAA formation (figure 1) 5.

Together, both the in vitro and the human post-mortem AD brain tissue data provide compelling evidence that tTG activity not only colocalizes with the pathological hallmarks of AD but also induces stable and toxic oligomers of Aβ and tau, which are both crucial in AD pathogenesis. We are dedicated to unravel the suitability and feasibility of inhibition of TG’s catalytic activity as a novel therapeutic strategy to counteract the amyloid-beta and tau pathology that underlies neurodegeneration in AD 4. 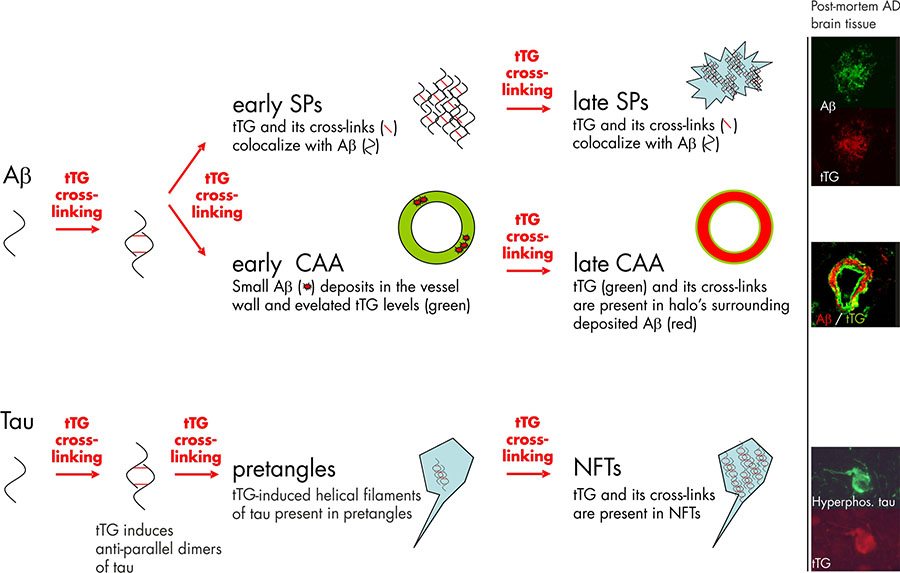 Figure 1. Tissue transglutaminase (tTG) and its catalyzed cross-linking in the formation Alzheimer’s disease pathological hallmarks. Studies on post-mortem brain tissue of AD patients confirm this notion as the tTG enzyme and its cross-linking products are already found in diffuse senile plaques (early SPs), the precursors of classic SPs (late SPs). In line with the observations in SP formation are the findings in cerebral amyloid angiopathy (CAA). In early stages of CAA, elevated anti-tTG antibody immunoreactivity has been demonstrated compared to non-affected vessels. However, in contrast to diffuse and classic SP, in which tTG and its cross-linking products colocalize with the deposited Aβ, tTG (green) and its cross-links are present in halo’s surrounding the Aβ deposition (red) in late stage CAA. Apart from the Aβ lesions in AD, tTG and its cross-linking activity are also observed during neurofibrillary tangles (NFT) formation. tTG is known to cross-link tau into anti-parallel dimers, that are suggested to precede filament formation. The presence of tTG-induced filaments and tTG cross-links in pretangles, a precursor stage of NFTs, suggests an early involvement in NFT formation. Finally, both tTG and its cross-links are also observed in mature NFTs in AD. Immunohistochemical staining using antibodies directed against either Aβ, hyperphosphorylated tau or tTG on post-mortem AD brain tissue was performed as described in previous reports of our group. Figure modified from Wilhelmus MMM et al., Tissue transglutaminase in Alzheimer’s disease: involvement in pathogenesis and its potential as a therapeutic target. Journal of Alzheimer’s disease, 2014;42 Suppl 3:S289-303. 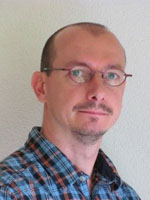 Micha Wilhelmus is an assistant professor at the department of Anatomy and Neurosciences at the VU University medical center in Amsterdam, The Netherlands. He is project manager in the section of Cellular Neuropharmacology and focuses on identification and characterization of novel, overlapping, biochemical pathways critically involved in glial cell activation, neuronal damage and protein aggregation in common neurodegenerative disorders, in particular Alzheimer’s (AD) disease. He has been working on the role of transglutaminases in AD pathogenesis as of 2007. 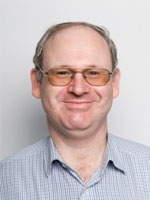 Benjamin Drukarch is an associate professor at the department of Anatomy and Neurosciences at the VU University medical center in Amsterdam, The Netherlands. He is head of the section of  Cellular Neuropharmacology and has a long-standing track record for experimental research  into identification and characterization of novel targets for the development of disease modifying treatments for neurodegenerative disorders, in particular Parkinson’s- and Alzheimer’s disease and Multiple Sclerosis. Wthin this context he has studied transglutaminases as a potential treatment target since 2005, recently extending his interest into developing PET ligands for the in vivo detection of transglutaminase activity under pathological conditions and the monitoring of the effects of transglutaminase modifying drugs.