by Charlotte A. Bäuml and Diana Imhof (September 2019)

The first description of applying blood-sucking leeches in medicine dates back to the second century before Christ, when it was first described by Greek healers. Traditional leech therapies are very rarely applied in modern medicine. Nonetheless, leeches are for instance still used to enhance blood circulation in reattached extremities.1
After centuries of using and studying the composition of leech saliva, the active components responsible for its good efficacy have been identified as a mixture of different blood anticoagulants. These substances, mostly peptides, act against different  factors of the blood coagulation cascade – several of which are already used in clinical trials or medical application.2
The medicinal leech (Hirudo medicinalis) is probably the most-studied leech and produces the best-known leech anticoagulant, hirudin, a very potent and specific peptide thrombin inhibitor.3 Several anticoagulants from leeches have been studied, targeting different components of hemostasis and immune defense: Antistasin from Hementeria officinalis is a 119mer peptide which inhibits coagulation factor Xa,4 and Bdellin from Hirudo medicinalis is a peptide inhibitor of plasmin,5 to name a few. Not all of the known active leech components, but many, including the three mentioned, are cysteine-rich peptides, rendering them less susceptible to degradation by the host organism.

Tridegin is – except for a homologous cDNA sequence in Haementeria depressa,6 which has not been detected or characterized at the peptide level to date – the only natural peptide inhibitor of blood coagulation factor XIIIa (FXIIIa) known so far. The 66mer disulfide-rich peptide was originally isolated from the giant amazon leech Haementeria ghilianii in 1997 and first described by T. Sawyer and coworkers.7 In the following years, three different patents were registered,8–10 pointing to its high therapeutic potential, which is why it was placed on the agenda of the biopharmaceutical company Curacyte AG at that time. Our research group has started structure-activity relationship (SAR) studies of this promising peptide in 2009, when Curacyte had decided to discontinue their tridegin-related research.  One of the former Curacyte investigators, Prof. Torsten Steinmetzer (now Philipps University, Marburg, Germany) who had been working together with Diana Imhof in the Institute of Biochemistry and Biophysics (University of Jena, Germany), suggested to attempt a chemical synthesis of tridegin. Apart from its potential as FXIIIa inhibitor, tridegin is a very interesting oligopeptide for research at the interphase of biology and chemistry as it also exhibits features of a miniprotein.
In earlier studies, tridegin was produced both by Fmoc solid-phase peptide synthesis (SPPS) and by recombinant expression.11–13 Truncation and mutation of the peptide revealed first insights into how tridegin exerts its inhibitory potential towards FXIIIa.12 Tridegin can be functionally divided into two parts (Figure 1). The flexible C-terminal region (aa 38-66) is responsible for its inhibitory activity with the glutamine residue at position 52 interacting with the active site of FXIIIa.12 The contribution of the C-terminal part to the binding to FXIIIa, however, appears to be less significant.13 This tridegin segment exhibits inhibitory action on its own, yet seems to act as a substrate for FXIIIa, too: Its inhibitory activity decreases after a short time, while only the full-length tridegin acts as a stable inhibitor. The N-terminal part (aa 1-37), on the other hand, is stabilized by three disulfide bonds and does not possess inhibitory activity. The binding to FXIIIa, however, seems to be mediated primarily by this fragment.13 By analyzing different tridegin analogs (reduced and oxidized form, Cys-Ser mutated versions), it became evident that the three disulfide bonds also contribute to the inhibitory potential of tridegin. The application of a tandem MS approach after enzymatic digest revealed the presence of three out of 15 possible disulfide isomers in the reaction mixture of the oxidative self-folding approach, all sharing the disulfide bond C19-C25.13 In an attempt to elucidate the role of this linkage in folding, stability, and function of tridegin, three further tridegin analogs lacking this bond were synthesized and analyzed.14 A fluorogenic assay revealed only minor reduction of the inhibitory activity of the analogs in comparison to the  3-disulfide-bonded isomer mixture. To further analyze the potential of the 2-disulfide-bonded analogs as FXIIIa inhibitors, their impact on FXIIIa-promoted red blood cell retention, and consequently clot size15,16 was investigated in a whole blood clotting assay. Herein, the inhibitory potential of all three analogs was confirmed. In a parallel theoretical approach, folding and stability of the three isomers were studied via molecular dynamics (MD) simulation. Additionally, the model structures were docked onto FXIIIa, showing only minor differences in their binding modes towards FXIIIa, which goes in line with the experimental data.14
In conclusion, structure-activity relationships of the inhibitory potential of tridegin against FXIIIa have been thoroughly investigated. Current research focuses on simplified production strategies for potent tridegin analogs, because the molecule still represents a promising lead structure for future FXIIIa inhibitor development. 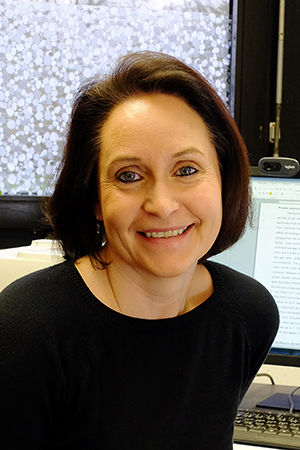 Diana Imhof is a Professor for Pharmaceutical Biochemistry and Bioanalytics at the Pharmaceutical Institute of the University of Bonn, Germany. Her research interests cover peptide and protein biochemistry, peptide chemistry and analysis, multiple disulfide-bonded peptides and miniproteins, and peptide/protein folding studies. The FXIIIa inhibitor tridegin has been object of research since 2009. 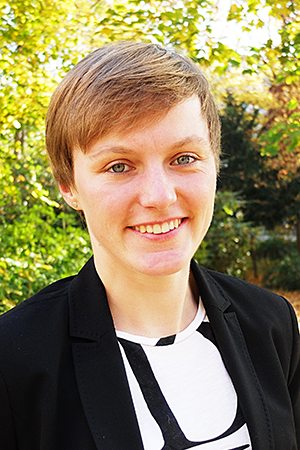 Charlotte A. Bäuml is a PhD student in the research group of Prof. Diana Imhof at the Pharmaceutical Institute of the University of Bonn, Germany. She completed her studies in Molecular Biomedicine and Biological Sciences at the Universities of Bonn and Cologne. In 2014, she joined the laboratory of Prof. Diana Imhof and intensified her work on the FXIIIa inhibitor tridegin during her PhD studies.