Introduction
Since decades, coagulation factor XIII (FXIII) is considered as a scientific qualified target for the development of novel anticoagulants [1-3]. Inhibiting FXIII may lower the current bleeding risk in anticoagulation therapy since neither the thrombin level nor the platelet activation is affected.
Zedira develops small molecule inhibitors to modulate FXIII activity by structureassisted drug design [4]. To assess the efficacy in blood, we aimed to generate a monoclonal antibody directed against the isopeptide bond (“crosslink”) within fibrin as preferred biomarker. After proteolytic activation by thrombin, FXIIIa modifies the soft fibrin clot and thereby introducing covalent bonds. First, crosslinking between abutting γ-chains of fibrin is catalyzed and subsequently α2-antiplasmin is incorporated to further increase the resistance against fibrinolysis (figure 1A). Plasmin catalyses the retarded clot dissolution and the release of crosslinked fibrin degradation products (xFDPs / D-dimer). In case of blocking FXIIIa only a soft clot is formed which may be rapidly hydrolyzed yielding non-crosslinked fibrin degradation products (FDPs, figure 1B).
SDS-PAGE of those degradation products reveals that the protein pattern differs remarkably under reduced and non-reduced conditions as shown in figure 1C.
Monoclonal “D-dimer” antibodies (e.g. DD-3B6/22) are commercially available and are used in In Vitro Diagnostics (IVD) to exclude thromboembolic events. However, these monoclonals do not detect the crosslink itself but address a portion of polypeptides within the D-domain after plasmin degradation that are conformationally reactive [7]. This hinders for example standardization and comparison of data obtained by different assays [8]. Therefore, we developed "DD-XLink-mab“ (A076) which directly recognizes the crosslinked fibrin neoepitope.

Synthesis of the antigen and immunization
A peptide sequence derived from human γ-fibrinogen containing Q398/Q399 and K406 was synthesized by standard solid-phase peptide chemistry. The purified peptide was subsequently cross-linked using thrombin activated FXIII (FXIIIa, Zedira, T070). Mass spectrometry confirmed the formation of iso-peptide bonds. After conjugation to Keyhole Limpet Hemocyanin (KLH), the conjugate was used for immunization of three mice. Serum of one mouse showed mild reactivity against crosslinked fibrin degradation products (xFDPs), which was used as read out both in ELISA and in Western-blotting. Spleen-derived B-cells from this mouse were fused to myeloma cells yielding hybridoma cell lines. Separation and further screening lead to a single clone producing a monoclonal antibody (named A076) with a substantial reactivity against xFDPs in ELISA.

Characterization of the monoclonal antibody (mAb)
The specific requirement for the monoclonal antibody (mAb) is to discriminate between crosslinked and non-crosslinked fibrin. In addition, selectivity against fibrinogen and other blood components is indispensable.
Production of xFDPs and FDPs: coagulation was simulated in vitro by adding thrombin to a mixture of human fibrinogen (Zedira, F004) and rhFXIII (Zedira, T027) in physiological concentrations either in the presence or absence of ZED3118, a direct-acting FXIIIa inhibitor. The insoluble fibrin clots were subsequently degraded by rhPlasmin (Zedira, P012) and the soluble proteins were separated by gel filtration chromatography. These protein preparations are used for ELISA and SDS-PAGE with subsequent Western-blotting.
Immune-staining of xFDPs and FDPs by commercially available “D-dimer” monoclonal antibody (DD-3B6/22) is shown in figure 2. The pattern reveals that in contrast to our novel DD-XLink-mab“ A046 both xFDPs and FDPs are recognized under non-reducing conditions only, in accordance with the literature [7]. Westernblotting using novel "DD-XLink-mab“ (A076) indicates specificity for the cross-linked fibrin both under non-reducing and reducing conditions (figure 2b). The antibody shows no reactivity against fibrinogen or other plasma proteins. 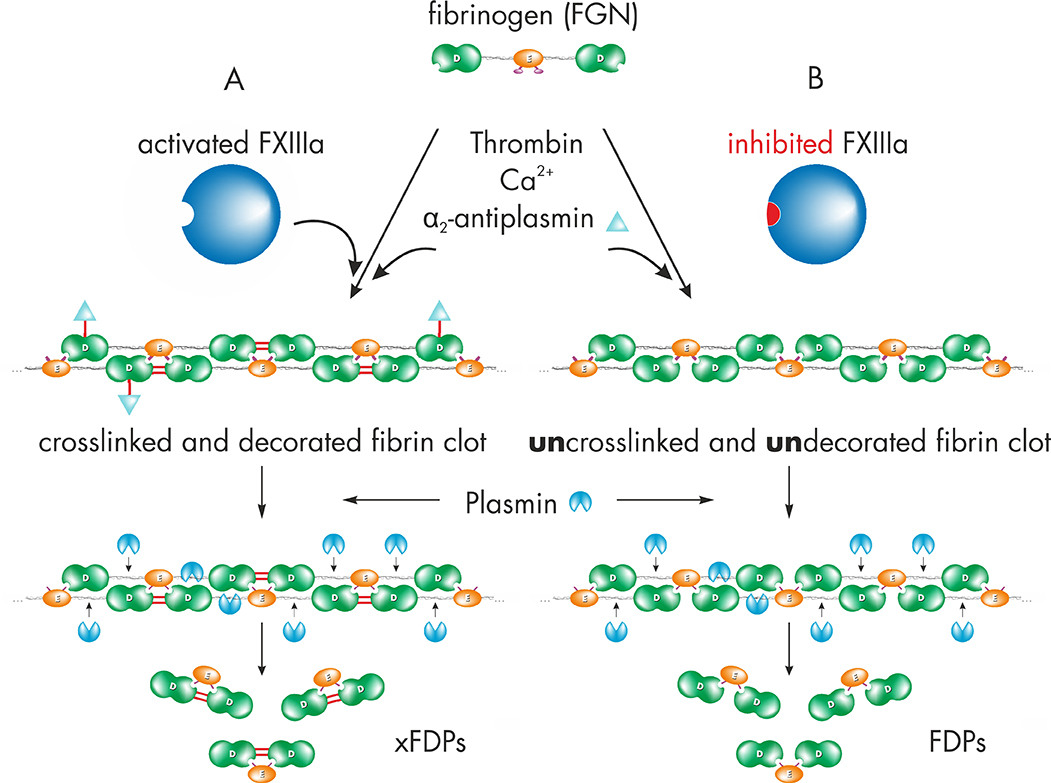 Figure 1: B) Inhibition of FXIIIa leads to the fibrin fiber assembly without covalent modification. The so called “soft clot” is highly susceptible for fibrinolysis leading to fibrin degradation products (FDPs). 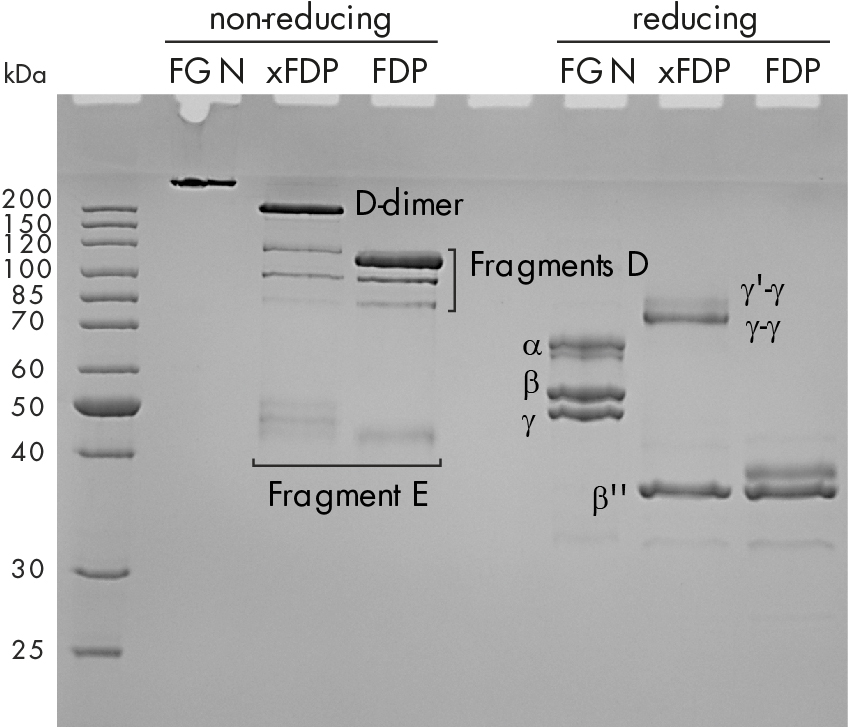 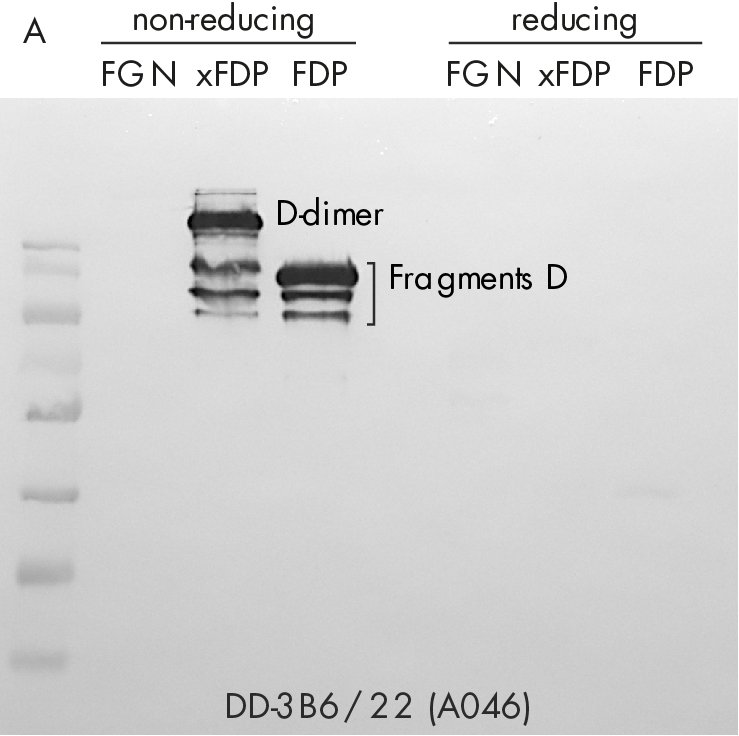 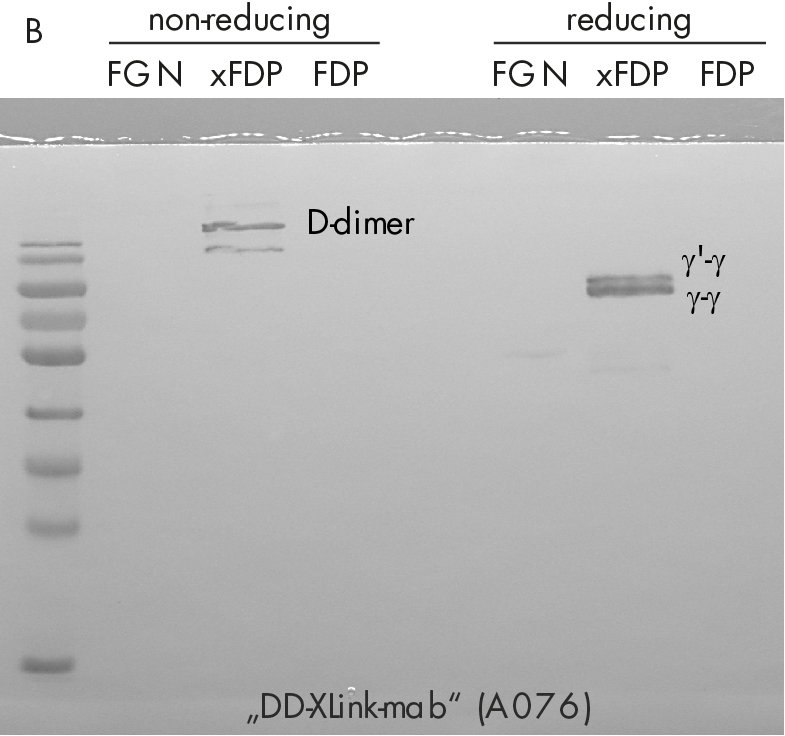 Figure 2: Western-blotting using A) “D-dimer” (DD-3B6, Zedira A046) and B) our novel DD-XLink-mab“ (Zedira, A076). Fibrinogen, crosslinked fibrin degradation products (xFDPs) and non-crosslinked fibrin degradation products (FDPs) under non-reduced and reduced conditions have been used according to Figure 1C. The most characteristic bands are referenced according to [6].

Conclusion
We developed and characterized “DD-XLink-mab“ (A076) directed against the major crosslink within the γ-chains of human fibrin. The recognized neoepitope is clearly distinct from the one recognized by commercial “D-dimer” antibodies used in IVD for exclusion of thrombotic events. We expect that the novel monoclonal antibody will be a valuable tool for basic hemostaseology and transglutaminase research. Further, the evaluation in IVD, for clot imaging, and especially in course of our FXIII drug development program is ongoing.