For peptide microarray-based epitope mappings, an antigen sequence is translated into overlapping peptides. To save costs, the peptide-peptide overlap is frequently reduced to e.g. 10 or 11 amino acids with 15mer peptides, as provided by most commercial suppliers. The peptide-peptide overlap, however, plays an important role for epitope prediction. A reduced peptide-peptide overlap hampers the exact identification of conserved core motifs, the unambiguous itemization of neighbored epitopes in polyclonal samples, or the discrimination of non-specific binders from real epitopes.
Due to our proprietary laser printer-based on-chip synthesis, PEPperPRINT is able to routinely translate antigens into peptide microarrays with a maximum peptide-peptide overlap, e.g. 14 amino acids with 15mer peptides (equals a shift of 1), to provide the maximum amount of epitope coverage and prediction at reasonable costs. 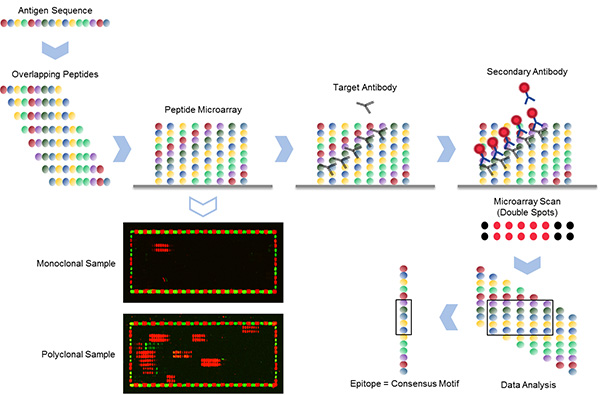 High resolution linear Epitope Mapping is based on an antigen translated into 15 aa overlapping peptides with maximum peptide-peptide overlap of 14 aa (shift 1). The peptides are directly synthesized on the glass slides. The array is subsequently stained with the target antibody that binds to its specific epitope and a secondary antibody that has a fluorescence label. An image of the array is taken with a microarray scanner. Since PEPperPRINT prints spot duplicates, each signal appears in a double row. After data acquisition, the PepSlide® Analyzer software immediately calculates the common motif in the peptide hits, which is the epitope of the target antibody.
On the left two examples of such an epitope mapping are shown, a monoclonal sample binding to a single epitope and a polyclonal sample binding to multiple epitopes. Each array is surrounded by HA (red) and FLAG (green) control peptides.